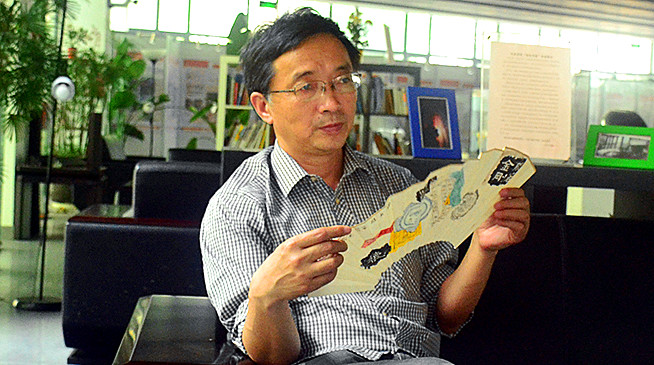 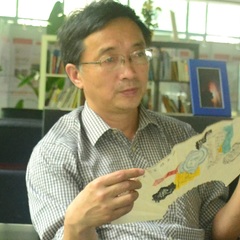 Guo Ruoqi: Can you please tell me your name?

Guo Ruoqi: What is the name of the company you work for and your position?

Interviewee: I am Associate Professor (School of Automobile Technology) at Tongji University

Guo Ruoqi: What is your main job?

Interviewee: I teach auto-related courses at Tongji university and have done some research on the operational stability of cars. I was also the main lecturer of the popular course called "car construction" in Shanghai. The rest of the time I spend diligently painting on fans painting. Furthermore, I am a member of Shanghai teachers painting and calligraphy association. 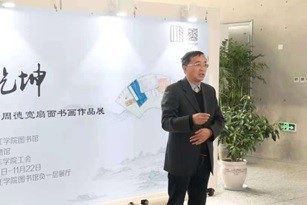 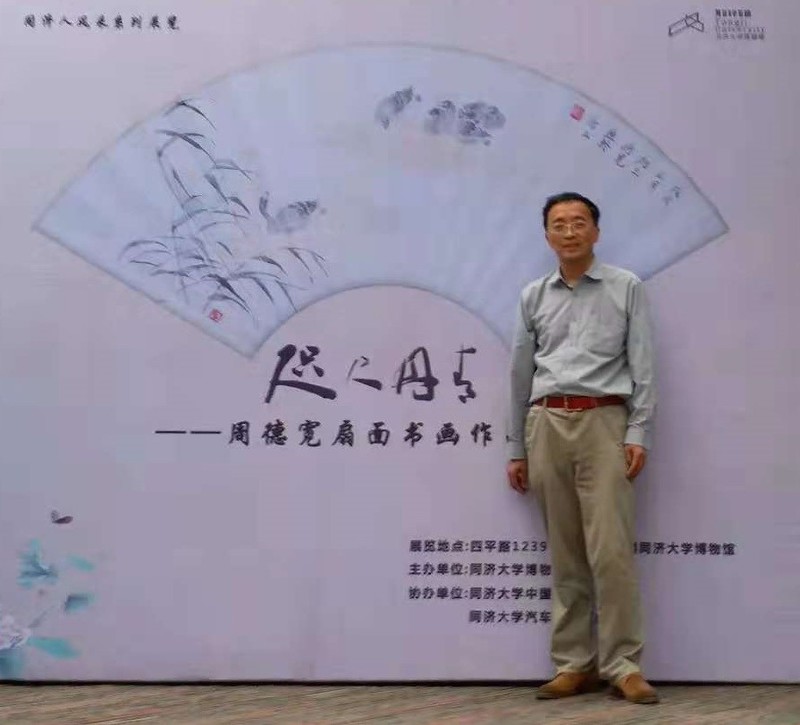 Guo Ruoqi: What experience made you choose to paint on fans?

Interviewee: In 2003, during the period of SARS, every faculty member of Tongji University was issued a folding fan with four characters on it stating "Fighting SARS", however the fan was blank and monotonous on one side.

That is when I decided to draw some patterns with brushes according to my own ideas on the fan. My colleagues and students all liked it very much, so I began to draw on more fans.

Compared with ordinary paintings, I believe fan paintings are more difficult to make because it requires smaller brushes and folds on the fan, which requires the painter to have a deep knowledge of lines.

In the industry, fan paintings are described as "being only one foot instead of a three feet of paintings". Fan paintings are practical, technological and artistic. Since ancient times, from emperors and officials to ordinary people, there have been different levels of painting and calligraphy on fans which makes them one of the most widely circulated works of art.

Guo Ruoqi: Could you tell me something about your major works? How do you combine different styles of materials into a classic fan?

Interviewee: Insects, bronzes, landscapes and Jin Ash Piles (also known as the Eight-Break Picture) are the most common works.

Mr. Zhou Dekuan is accustomed to using traditional Chinese painting techniques to reflect the original ecology of things. Dragonflies, butterflies, horses and tigers are vivid. Mr. Wang is especially good at drawing crickets. He can depict each part of the cricket body in detail. He can grasp the cricket's action and manner in different situations accurately. His antennae are very sensitive and lively. "Crickets should have round heads, slender feet, wide necks, strong hind legs, and thin and lifelike wings." In the picture of crickets in the same boat, we can see some vivid interesting crickets. Because of the paintings meticulous description, elegant brushwork, and elegant and popular appreciation these paintings have become Zhou's style, and are praised and purchased by many experts. 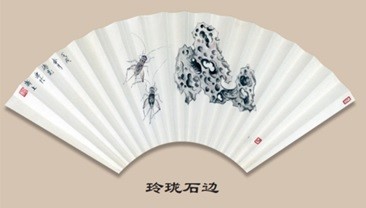 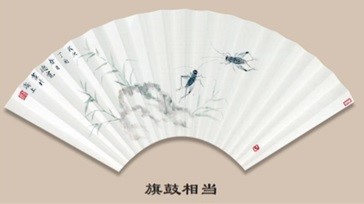 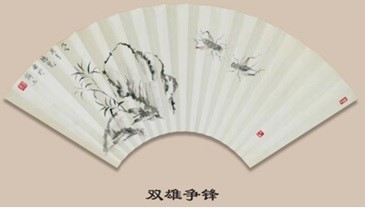 In the traditional Chinese flower and bird painting, Mr. Zhou added grass and insects to bring the picture full of vitality. The red flower and ink leaves with insects make the saying "one flower, one life, one painting and one world" appear on the paper. 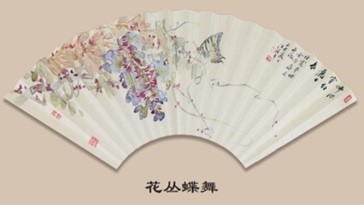 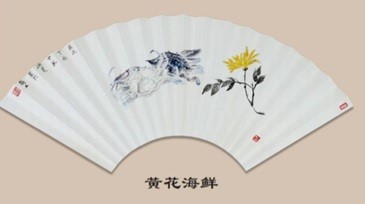 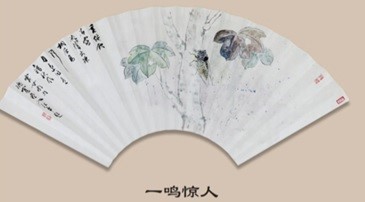 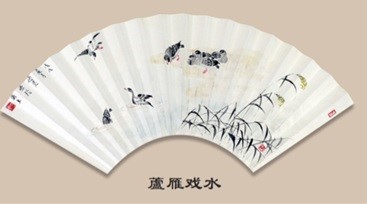 The inscriptions on bronze wares are the inheritors of thousands of years of history, silently telling the scenes of the past. 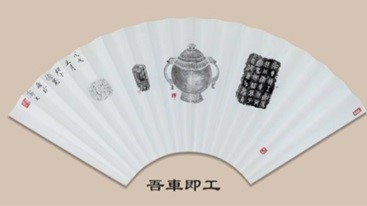 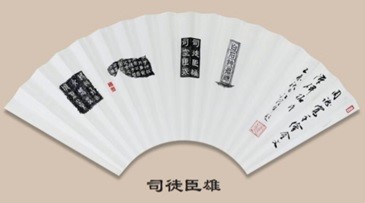 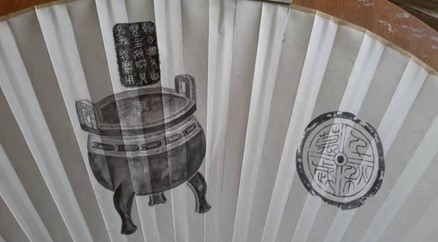 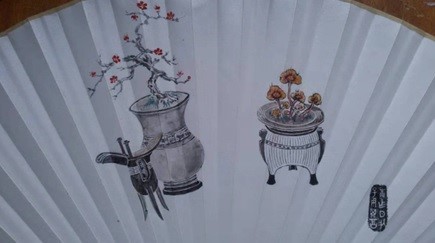 Heaven and Earth on the fan – Jinash Pile painting

Jin Ash Pile is a very small painting form, which originated in the Ming Dynasty and originated from the traditional Chinese culture itself. Afterwards, it was influenced by the western material civilization. It is commonly known as "overturning the basket of words and paper". It forms a picture by painting fragments of broken cultural relics. It gives people the feeling of simplicity, elegance and antique fragrance, so it is favored by literati and refined scholars. Mr. Zhou Dekuan has been deeply attracted by the traditional painting of Jin Ash Pile several years ago. He has drawn many works of Jin Ash Pile, most of which have been collected by amateurs of Jin Ash Pile paintings from all over the country. 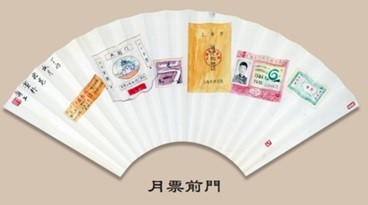 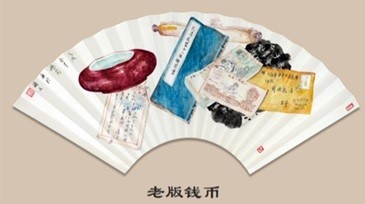 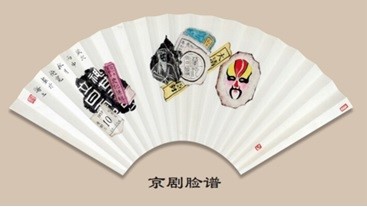 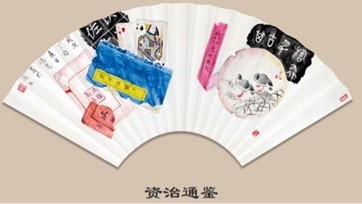 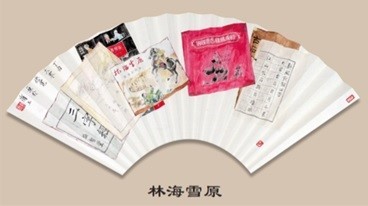 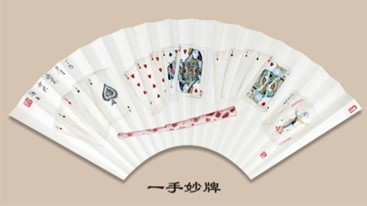 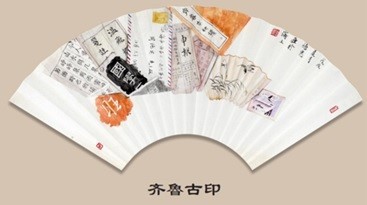 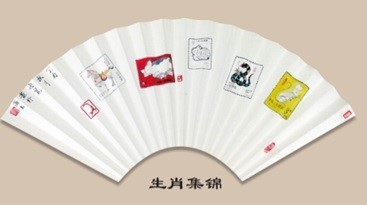 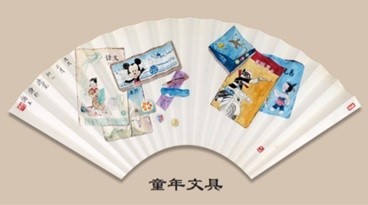 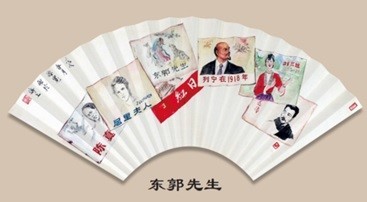 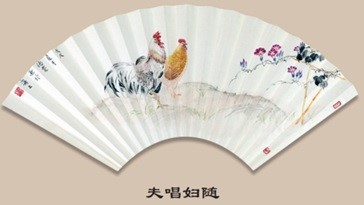 Mr. Zhou Dekuan talked about fan painting, which is a traditional Chinese painting with a long history. The reason why ancient literati were lucky to collect fans and create fan painting is that poems, songs and calligraphy paintings reveal one's taste. Moreover, it is a kind of elegant object with sleeves. The pictures and texts on the fan can be held in the hand, and it is easy to carry, so that it can highlight the owner's artistic taste. If the fan is painted by oneself, then one's talent can be displayed on the small fan and can be displayed inadvertently.

He believes that college students should not only have scientific and technological literacy, but also have the support of traditional culture. He hopes that his experience can be used as a reference or a kind of inspiration for students and appeals to college students to pay attention to traditional culture and art. With enough practice and crystallizing the ideas and creations of the older generation can be brought in today's cultural exchange. The collision between China and the West, can still give full play to the unique advantages and vitality of Chinese traditional culture. (editor's note)

Guo Ruoqi: How did your past life experience affect your current works?

Interviewee: Since I was a child living near Chenghuang Temple in Shanghai, every holiday, a famous painter and calligrapher in Shanghai would come to the scene of Chenghuang Temple to paint. The strong atmosphere of painting and calligraphy deeply attracted me. From then on I began to copy the masterpieces of our predecessors and observe flowers and birds, landscapes, characters and so on. Perhaps it is the innate talent of painting that makes interest the best teacher.

On this artistic road that I have always adhered to I have also been fortunate to be guided by Mr. Jiang Liping, a professor of Tongji University and a well-known calligrapher and painter in Shanghai. For me, painting is not a profession that needs to be specialized in, as long as it can be painted forever. Just fine. Observing the details of life, drawing notes, recording plots, placing emotions, and finding a positive and healthy hobby make life more meaningful and make me love life more.

Guo Ruoqi: Do you have any upcoming exhibition plans?

Interviewee: In early 2019, fan painting exhibitions will be arranged in Jiading library and Jiading campus of Tongji university to promote traditional culture.

Guo Ruoqi: How can a person contact you if a collector is interested in your work? (email address)

Interviewee: WeChat ID Dekuan77. Art road is long, up and down and seek, welcome the knowledge to teach me, in order to enjoy themselves.